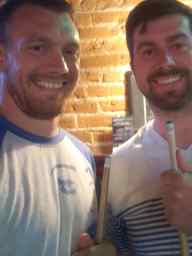 “Where do you get your perseverance?” “Wow, I could never do that!” “You don’t stop you just keep going.” Where does the determination come from?”  These are all exclamations and questions I have received in my lifetime.  My whole life my brother and I have been underdogs when it came to sports.  I was never the fastest nor he the biggest.  Although I was born in my hometown my family had just relocated there a year before. This meant nobody knew the “Moore’s.”  Growing up my brother became a household name and paved the way for my success.  It was not due to raw talent; however, he worked his butt off.  He is one of the few people I can say is an inspiration and I’ve looked up to during my life.  My success both in and out of sports I owe to the lessons he taught me growing up.

People raised the question, “Why did you continue riding after passing the Guiness World Record mark on the electric bike and fly home from Miami?” Or “Why did you continue after breaking your wrist? You could have stopped when reaching home and people would have understood.”  There are multiple answers to these questions, but I’ll answer simply, look at the picture.

Growing up our parents put us in every sport imaginable. They had two rules: Once you start you cannot quit mid-season and you have to try your best.  My brother, JT Moore, showed me day in and day out what ‘your best’ is.

Everyone who tries their best will become elite, but not every elite will be the best.  Sure, a lot is based on genetics, private lessons, and natural talent.  Some people start behind the 8 ball in regards to outside factors: home life, race, access to equipment, neighborhood, etc.  However, you do not have be college, professional, or doctorate bound to be considered a success.  Trying your best does not mean when people are watching or when you are at practice, but behind the scenes. What are you doing at home? What are you doing outside of practice?

I excelled in wrestling; not because of talent or private lessons, but because I trained harder and wanted to succeed more than the next person.  I had and still have great mental strength and my never give up attitude pushed me past people in the final period.  Again, I refer you to the picture.  How far will you lay out to make the catch?  Many people would have let that pass hit the turf and continue on to the next play… not my brother.  I grew up idolizing him and

When we were younger my brother and I would would workout in the house together.  He would say he is going to do a certain number of rounds or a certain quantity of a lift and ask me to count.  Every time he would reach a few more than the number he told me. One day I asked him why he never stopped on the number.  His reply “Everyone is doing a certain amount and stopping, I am going above and beyond and have just become that much better than my opponent.”  People say you cannot teach hard-work or work ethics, but that one quote and those workouts upstairs in 100 degree heat stuck with me and taught me to go above and beyond the norm even when nobody is watching.

This lesson can be used to explain how athletes and academics become bigger, smarter, and better than their opponents.  The valedictorians in school are those who read extra books or study beyond the homework given to them. Those who come to school early to ask questions and those who don’t take weekends off of studying.  The most famous scientists of all time were considered ‘mad.’ They rarely slept and tried every little angle before finally inventing something nobody ever dreamed about. It was that 100th attempt after they said they would stop that helped them achieve their results.

I am glad this catch was captured, because as they say a picture is worth a 1000 words.  My brother worked his butt off four years to get playing time on the field and when he got the chance he made it count.  Growing up he was always smarter, faster, and more athletic than me in virtually everything.  From day one I was always “JT Moore’s little brother.” I hated it.  I was always a thick stout child while JT was lean and super fast. In Jr. High a football coach told me “Looks like your brother got all the talent in the family.” I was not coordinated, slow, chunky, and had severe knee problems enhanced by cleats.  This remark fueled me and put a chip on my shoulder to prove him and everyone else that I was my own person and not JT’s little bro.

On the wrestling mat there was no excuse.  Speed, strength, balance, attitude, plus a multitude of other factors determined the victor.  I took my brother’s teachings and beatings (we fought all the time) and would outwork my opponent daily in the wrestling room, doing more pushups than expected, a few more pullups than asked, coming in for extra workouts.  He forced me to wrestle rather than play basketball and it turned out to be a good decision.  The only people I ever heard while I was wrestling were my coaches and my brother.  Everyone else I drowned out.

I took my brother’s advice when I left academics and athletics and into the ‘real’ world.  Everything I do is what is more than expected of me.  Getting older my body sometimes would wish I would slow down ie the broken wrist on my bike ride, malaria/typhoid in Cameroon, but I know any curveball thrown at me I will attack and hit out of the park to be the best version of myself.  All of my success has one denominator and that is my bigger brother JT Moore. Yes, one can say I am the one who was on the mat or rode my bike, but without his teachings and guidance I would not have developed the mentality to never give up.

Today he has officially travelled around the sun once more and I wish him nothing but happiness and a great 33rd year on this blue mass we call Earth.  I love you and thank-you for all you do! PS can’t wait to come home and spank ya in a round of golf!